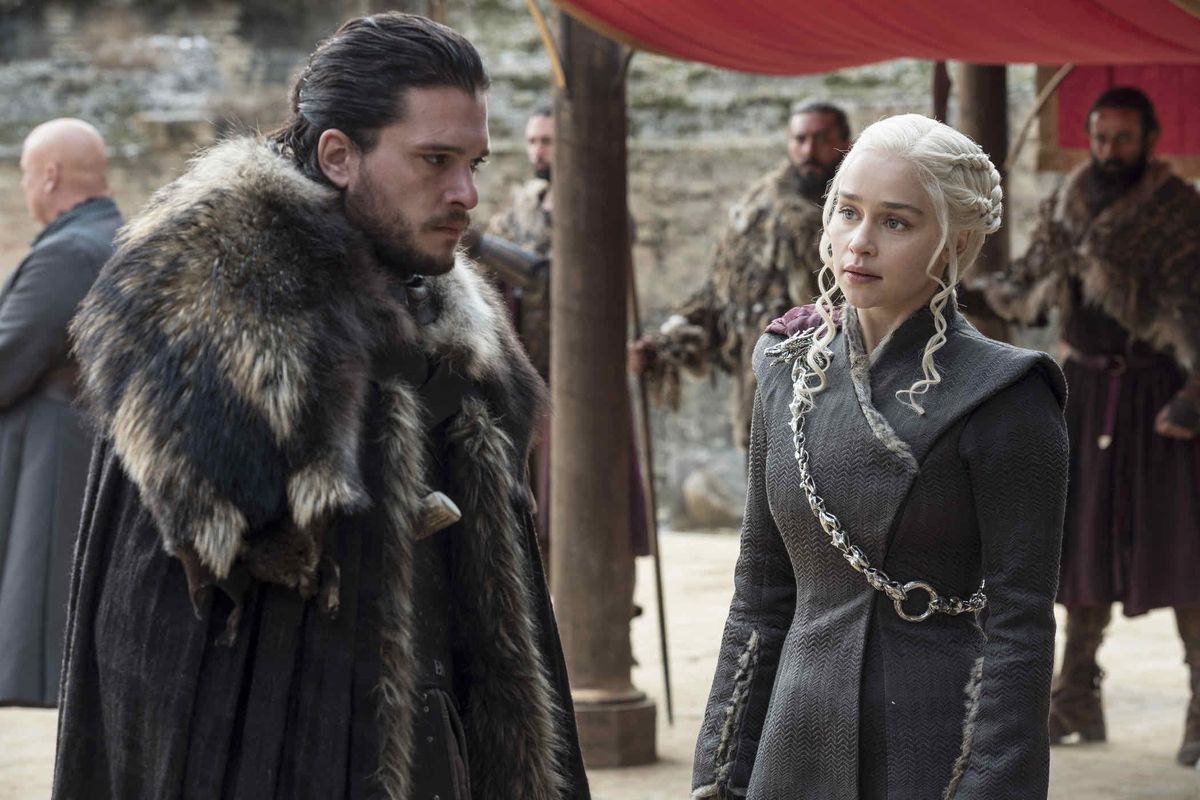 The opening few minutes were a perfect reintroduction to the bloody and murderous extravaganza that has become a staple of the show. The revenge that Arya enacted upon the Frays for The Red Wedding was an awesome and jaw-dropping opening to the new season.

The abundance of characters in Westeros are brought back into the fold nicely, as well as heightening the anticipation of the story arcs to come, none more so than Daenerys landing at Dragonstone, minutes after Sam discovers that there is mineable dragonglass beneath the island through his research at the Citadel. This is particularly important as Jon Snow and his army will need as much dragonglass as they can get in order to forge weapons for the battles to come against the White Walkers.

The Lord of Light to me feels like a very plausible god given that Jon and Beric Dondallion have been brought back from the dead, Melisandre bearing a demon to slay Stannis’ brother, and now a skeptic in the The Hound has a vision in the fire of a place beyond the wall.

*Ed Sheeran’s cameo was a pointless though…*

All in all, a strong opening episode.

This episode will be remembered for the obliteration of Yara Greyjoy’s Iron Fleet. Euron Greyjoy who has a madman personality to match his undoubtedly seafaring talents is the destroyer-in-chief of his neice’s fleet. This is also the first major chink in Dany’s path to the Iron Throne, as Yara’s, and through extension, her own naval fleet, that is supposedly the best, is destroyed convincingly.

We also have the sexiest and steamiest scene in the whole of Season 7 in this episode. And to most people’s surprise the scene belonged to Missandei and Grey Worm. They perform the scene extremely well.

Sam performs a risky and forbidden procedure to remove Jorah’s Greyscale infection, and the editors of Game of Thrones include the most gruesome editing and transition of scenes of all time when they change from the removal of Greyscale to the digging into of a pie…

Sam’s message about the dragonglass is received by Jon, and he heads to Dragonstone. The hotly anticipated meeting between the show’s eponymous protagonists nears…

Despite Dany’s demands for Jon to bend the knee, and Jon’s request to mine the dragonglass on the island, the scene-stealer is Davos. When Missandei spends 5 minutes introducing Dany through her many, many titles, Davos (Liam Cunningham) and his deadpan delivery is the best moment- “This is Jon Snow… He’s King of the North.”

Tyrion’s advice to take Casterley Rock backfires massively given that Cersei has predicted that this would happen and removed most of the troops and supplies in order to take Highgarden but also to corner the unsullied army, as well as destroying their ships.

The Queen of Thorns: Olenna Tyrell delivers one last riveting performance as she sees Highgarden taken over by the Lannister forces. Her withering responses to every King and Queen has been a delectable facet of the show, and has seen her become one of the show’s favourite characters for many. When Jamie comes for her, and mercifully gives her a poison- she reveals she was responsible for King Joffrey’s death, and to let Cersei know.

“It must have been horrible for you as a Kingsguard, as a father. It was horrible enough for me, a shocking scene, not at all what I intended. You see, I’d never seen the poison work before. Tell Cersei, I want her to know it was me.”

Starks reunite. A thrilling battle. And Brienne and Arya sparring.

The Loot Train Attack was an exceptional piece of film-making. The below video shows the extensive work by cast, stuntmen, crew and the directors that they all putt into the making of such a brilliant and enthralling episode. The scorpion ballista, created by Qyburn is used by Bronn and it wounds Drogon, but the wounding seemed to bring out the savageness of the dragon as it torched the Lannister forces very quickly. Those forces were on the way back from Highgarden with gold and food- and Dany’s Dothraki army and her dragons have something to say about that though, especially following Cersei outwitting Dany and Tyrion at Casterley Rock.

We also see the beginnings of the potential romance and relationship between Dany and Jon when he shows her some paintings beneath Dragonstone, while Jon’s men were mining the dragonglass. This provides us with more information on the history of the First Men, The Children of the Forest and The White Walkers.

The scene that I am referring to is when Bran wargs into a raven and he witnesses the Night King’s army. The location is similar to one we see in Episode 6… But the crucial moment is that the Night King looks directly at the ravens and they scatter. This has led to many theories about the identity of the Night King, as well as the warging powers he may possess.

One story-line that doesn’t seem to be garnering any interest for me is the Arya-Sansa-Baelish story-line, especially in comparison to others. Arya has gone from the bad-ass assassin to a weird girl. Her best moment so far has been her sparring with Brienne, and the opening minutes of the season where she enacted revenge for the murders of her brother and mother. Sansa and Baelish seem to not have moved forward at all this season, and their characters have become stale.

Further confirmation of Jon Targaryen with the scene with Drogon, much to Dany’s surprise. Who also receives another surprise when Jorah, freshly de-scaled, arrives at Dragonstone to pledge his loyalty and service to his one true love. No sooner has he pledged himself to her, before he is sent North and Beyond the Wall to assist Jon on a mission.

Jon is joined by members of The Brotherhood, some of the Free Folk and other characters that all have some reason to hate each other. They are  going beyond the wall to bring back a wight to show Cersei that they all have a common enemy and they should all join forces to defeat it. 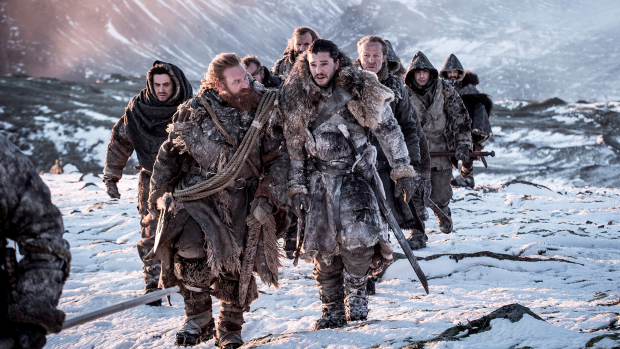 Episode 5 ended with Westeros’ version of Suicide Squad crossing the threshold of The Wall and into the domain of the Night King, in their attempt to bring a wight back and show Cersei, in the hope of uniting all the armies to defeat the White Walkers. The raiding party- Jon Snow, Jorah Mormont, Tormund Giantsbane, The Hound, Gendry, Beric Dondallion and Thoros- were all brilliant.

Some points of note in this episode:

Where the hell did Benjen come from?!

Viscerion is killed by the Night King.

Said dragon is resurrected to join his army. Will we get some dragon-frost form of attack?

Jon is aboard a ship having survived a mauling by the dead- and he and Dany share tender moments and he pledges himself to her- bending the knee, as well as implied affection for her.

The last episode is set up perfectly, as we anticipate the Night King’s reaction, and whether Cersei will join the fight.

An extra long episode of Game of Thrones- and it did not disappoint. And has set up the final and eighth season of the show up perfectly.

The true identity of Jon Snow is finally revealed out loud in a conversation between Bran and Sam – Aegon Targaryen. The time was brilliant too, as Jon and Dany were making love aboard a ship heading to Winterfell.

The meeting between Cersei, Dany, Jon, Tyrion and everyone else was very tense and the dragon pit was a great location for said meeting. The gladiatorial effect and sense of unease concerning the travelling party was evident given they were surrounded.

Arya-Sansa-Baelish saga has concluded in slightly disappointing fashion. The in-it-together-from-the-beginning scenario was predicted by many viewers and the effect didn’t shock- anyhow, Baelish’s character had long outstayed his welcome, and is a character that doesn’t hold any importance anymore.

The finale was outstanding and chilling. The Dead and their dragon have obliterated The Wall and are now marching southwards towards The North and Winterfell. Season 8 should be INCREDIBLE!