Neither Here, Nor There: Travels in Europe
Bill Bryson 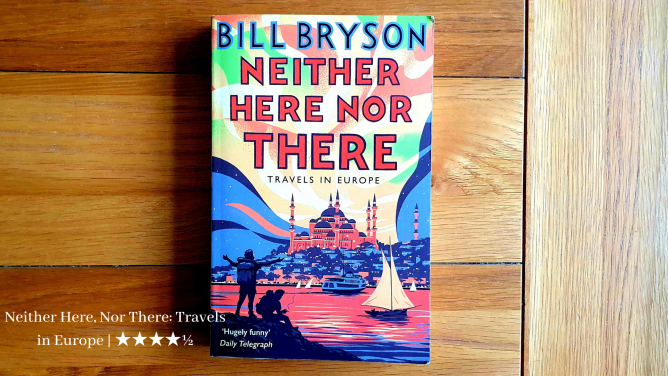 Neither Here, Nor There is a wonderfully comic tale of Bill Bryson’s journey across Europe in the early 1990s when the continent was beginning to enter a new, modern era.

Having got a bit of a travel bug recently, and with no plans to visit anywhere soon, I decided to browse the travel section at Waterstones (other bookshops are available) and look for something that might inspire future plans.

I had never read any of Bryson’s work before, nor had I read any travel books for that matter, so I was pleasantly surprised by how much I enjoyed my first foray into the genre. Neither Here is packed with humour – I have never laughed so much from reading a book than I have with this. Every chapter (or country), Bryson would have a comic tale about his journey, the food or his general wanderings around the city he currently found himself in. His breezy style made for an entertaining read and I couldn’t get through the chapters quick enough!

Bryson’s writing style is more than just comedy. When talking about the Pompidou Centre in Paris, which I have actually been to, he displays his aptitude for nailing an analysis in a wonderfully anecdotal and succinct manner. He does this several times throughout the book, for places, people, food or the way of the world in general.

No one seems to have thought what the Pompidou Centre should do – that it should be a gathering place, a haven, because inside it’s crowded and confusing… There’s hardly any place to sit and no focal point – no big clock or anything – at which to meet someone. It has no heart.

As well as the wonderful comedy and coherent analysis, Bryson also has a great knack for describing the places he visits. Whether it be the craziness of Istanbul, the cleanliness of Copenhagen or the dreariness of Sofia, he paints a clear and accessible picture of every place he comes across, sometimes in just one paragraph.

But I want to highlight one passage where Bryson eloquently describes the beauty of a far flung place he has voyaged to. There were a few others I could have picked, notably Split in Yugoslavia (now known as Croatia), but the one that stuck in my mind the most was the following paragraph, where he is treated a wonderful view in Sorrento, Italy.

I spent an hour draped over the railings at the roadside, staring transfixed across the magical sweep of bay to Vesuvius and distant Naples and, a little to the left, floating in the still sea, the islands of Procida and Ischia. Lights began to twinkle in around the bay and were matched by early-evening stars in the grainy blue sky. The air was warm and kind and had a smell of fresh-baked bread. This was as close to perfection as anything I had ever encountered.

Neither Here is a book I thoroughly enjoyed reading. Not often have I found myself consistently laughing out loud while reading words on a printed page, but this is one such a book that clicked with the sort of anecdotes I like hearing/reading. I feel like Bryson might be a bit of a marmite figure, some (like myself) will enjoy this, but I can quite easily see others hating his writing style, his thoughts, his actions and his language (it was written in the early 1990s, so there’s a few outdated phrases, which I took with a pinch of salt). All in all though, a highly addictive read and the first of many Bryson and travel books I intend to read.