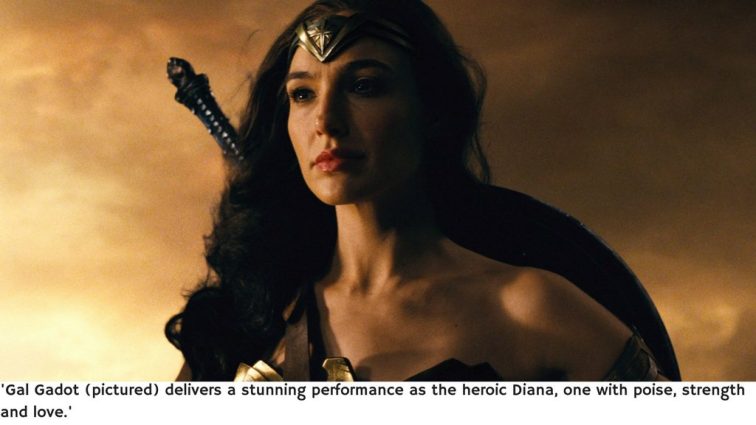 * This review will not contain any ‘wonder’ or ‘wonderful’ puns!*

Diana, she’s not referred as Wonder Woman in the film, is introduced as a magical child formed from clay and Zeus’ thunderbolt, who lives on Themyscira with the Amazons. She is pure of spirit, a pacifist and a warrior. Jenkins directs the origin story admirably, with scenes which displayed her personality and inherent traits that would become the essence of who she is and what she stands for. She was created as mankind’s hope to defeat Ares, who Zeus feared would return to wreak havoc on mankind. Despite her noble heritage and exhaustive training as an Amazonian warrior, she is isolated from mankind. That changes when American airman, Steve Trevor (Chris Pine, Star Trek) crashes into her world, with a German fleet in hot pursuit of him. His arrival unwittingly brings Diana the news of the war to end all wars, and thus, she is determined to see that this war comes to a peaceful end, by the death of Ares, who she firmly believes is responsible for the First World War.

Steve’s mission is to deliver a notebook belonging to Germany’s ‘Poison Doctor’, who is producing a gas that would kill thousands upon thousands of soldiers and civilians, which would ultimately destroy the impending armistice agreement. Persuaded that his cause is just, Diana joins him to London to deliver the notebook, and to begin her quest to seek out Ares and defeat him.

Set during the First World War, Jenkins is able to push forward important themes like female empowerment and standing against oppression. Gadot’s Diana is the perfect embodiment of those two themes. Her performance betters those given by her DC comrades Cavill’s Superman and Affleck’s Batman, especially given that her character is seen as a hero with moral fibre and wisdom, along with the warrior staple that other superheroes have. The fighting scenes were excellently crafted, from the use of slow-motion cinematography, to the brief inclusions of the WW soundtrack. Jenkins and Gadot have done and hopefully will do, outstanding work concerning Diana, her story and her heroic deeds. Gadot delivers a stunning performance as the heroic Diana, one with poise, strength and love.

Wonder Woman fulfills the heroic demands of this demanding genre, but it also tells a tale of the fight for women’s rights, as well as showcasing the meaningless of mankind’s obsession with warfare. Both of these issues are still continuing in the modern day, which could be construed as a potential message to (male) leaders across the world, to show them how far, or short, things have progressed since the First World War. Not only does Wonder Woman deliver on the dramatic content and terrific story, it also has underlying substance that elevates it above most films within this every-growing genre.

My favourite comic book films are, The Dark Knight (The Nolan-Bale trilogy is in a league of its own), followed by Deadpool, The Avengers and Guardians of the Galaxy. Wonder Woman is in that company. The well constructed origin story, fantastic plot, competent supporting cast, decent script, and of course, the powerhouse performance by Gadot, all contributed to a unwavering, and brilliant film. Despite the lacklustre Man of Steel and Batman Vs Superman films, the fact that this film has performed excellently at the box office, with critics and most importantly with the fans, has heightened my expectations for the Justice League film. A truly wonderful experience. Damn!