It’s been quite a while since my last Short Film Ratings, so I thought I’d watch some films that I have missed watching over the last few years for one reason or another. There’ll probably be another edition of this kind of post, or two, to come in the coming months. This edition contains The Big Short, Get Out, Kingsman: The Secret Service and Arrival.

END_OF_DOCUMENT_TOKEN_TO_BE_REPLACED

A selection of stats to show the types of books I have been reading this year – plus it is another chance for me to create an infographic! 🙂

END_OF_DOCUMENT_TOKEN_TO_BE_REPLACED 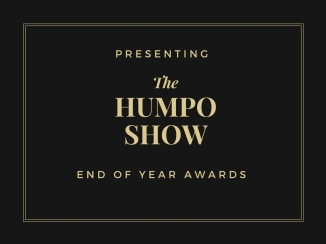 This is the second year of The Humpo Show End of Year Awards, where I celebrate my favourite films, books, bloggers and posts of the year. END_OF_DOCUMENT_TOKEN_TO_BE_REPLACED

The first classic edition of Short Film Ratings for quite a while, featuring short reviews of All the President’s Men, The Truman Show, The Ladykillers and A Few Good Men. 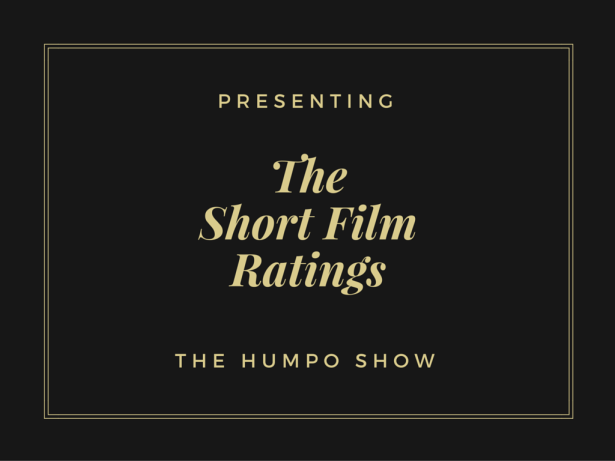 END_OF_DOCUMENT_TOKEN_TO_BE_REPLACED

Captain Sam Wyndham and Sergeant Banerjee of Calcutta Police investigate the assassination of a Maharaja’s eldest son, and heir to the throne of Sambalpore. Their investigation takes them to the lavish kingdom, which contains the beautiful Palace of the Sun as well as observing the royalty that fund their lavish lifestyle with the fortunes brought to them by the diamond mines. END_OF_DOCUMENT_TOKEN_TO_BE_REPLACED

The high-action film franchise is one of my favourites to watch. Tom Cruise is a great actor, and he is born for the role of Ethan Hunt. The stunts he performs are exceptional, the action is completed in such a fluid manner that makes it all come across as realistic and with great impact. Following up on my review of the recent release Mission: Impossible – Fallout, I have decided to do some short film ratings of the franchise as a whole.

Let me know how you would rank each film! END_OF_DOCUMENT_TOKEN_TO_BE_REPLACED

In this edition of Short Film Ratings, the emphasis is very much on British films, including the biographical fiction drama Miss Potter, the heart-touching story of Goodbye My. Chips, the brilliantly cute Paddington, and a film fun of laughs, Death at a Funeral.  END_OF_DOCUMENT_TOKEN_TO_BE_REPLACED

I won’t be blogging for a couple of weeks as I have some family issues that come first and I don’t think I will be able to find the time to blog about books, films, television, etc. I hope everyone is in good health and good spirits! 🙂 If any of you have posts that you think I might enjoy, feel free to link them in the comments and I’ll give them a read once I am back blogging.

I’ve nearly finished The Kite Runner, so that will be my next book review. And I’ve watched a few films lately, so expect a Short Films Ratings post when I return.

#TrendThursday | How relatable are the teenage protagonists in YA literature?

This week’s #TrendThursday will be used to talk about how relatable the 15, 16 and 17 year old protagonists that feature in Young Adult fiction.  END_OF_DOCUMENT_TOKEN_TO_BE_REPLACED

Star Wars: Rogue One
4 / 5
IMDb Rating: 8.2
Starring: Felicity Jones, Diego Luna, Alan Tudyk, Donnie Yen, Wen Jiang, Bodhi Rook, Mads Mikkelsen.
Plot Summary: Jyn Erso, a Rebellion soldier and criminal, is about to experience her biggest challenge yet when Mon Mothma sets her out on a mission to steal the plans for the Death Star. With help from the Rebels, a master swordsman, and non-allied forces, Jyn will be in for something bigger than she thinks. (IMDb)

Rogue One is the first of the spin-off anthology films to be released, sitting between The Revenge of the Sith (Episode III) and A New Hope (Episode IV). The prequels are as divisive as the original trilogy are masterful, and with Rogue One planted in between the two eras of Star Wars film-making, this film resembles the better of the trilogies more acutely than the lesser. The advanced CGI that was brilliantly captured, combined with the well developed characters made for a film befitted the franchise’s name. END_OF_DOCUMENT_TOKEN_TO_BE_REPLACED

Office Christmas Party
3.75 / 5
IMDb Rating: 6.0
Starring: Jason Bateman, Olivia Munn, T. J. Miller, Jennifer Aniston and Kate McKinnon.
Plot Summary: When the CEO (Jennifer Aniston) tries to close her hard-partying brother’s branch, he (T.J. Miller) and his Chief Technical Officer (Jason Bateman) must rally their co-workers and host an epic office Christmas party in an effort to impress a potential client and close a sale that will save their jobs. (IMDb) END_OF_DOCUMENT_TOKEN_TO_BE_REPLACED

I thought it was time for us film bloggers to have a Tag of our own. My blog covers many things from books and films, to music and theatre, and while the book bloggers have loads of tags that we nominate and tag each other in, the film bloggers don’t really have that. But I am hoping to change that starting now!

Westworld was planned to be the show that will take over the mantle from Game of Thrones as HBO’s leading show once Thrones finishes its final two seasons. However, due to the incredible debut season and cracking season finale, Westworld will be challenging Thrones for the critical acclaim this year due to the stellar casting, complex storylines and the phenomenal twists and turns that kept the audience guessing and theorising.  END_OF_DOCUMENT_TOKEN_TO_BE_REPLACED 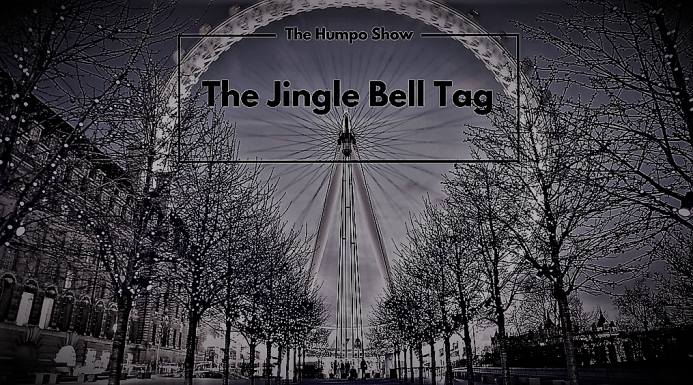 Less than a month till Christmas!
I absolutely love this period, the food, the music, the fuzzy films, the jumpers, the festive atmosphere, board games, spending time with friends and family, and of course doing Christmassy Book Tags…well, I thought I would create a Tag myself (others are available), I will tag some people (please don’t feel obligated to do this if you’re really busy), but EVERYONE can do this if you wish!!! END_OF_DOCUMENT_TOKEN_TO_BE_REPLACED

This post’s list of songs come from Rick Astley, Michael Buble, The Veronicas, The Lumineers, John Mayer, Kenny Chesney, Pink and Maroon 5. There are some brilliant videos, especially Maroon 5, The Lumineers and The Veronicas videos, be sure to check them out!

Rick Astley | Dance
Better known for his 80’s hit Never Gonna Give You Up. However, his new song Dance, which he performed on Strictly Come Dancing recently is infectious and I love it. I also quite like another track off his new album, Angels on my Side.

END_OF_DOCUMENT_TOKEN_TO_BE_REPLACED

A predictable answer to a thousand-year-old mystery

Maggie Costello is a former U.S. mediator who is called upon by her country to finally bring about peace between Israel and Palestine. The two countries were close to singing a peace deal before the death  of right-wing Zionist Shimon Guttman brought the talks to a halt. His death is closely followed by Palestinian archaeologist Ahmed Nour. Guttman died with a cryptic note in his hand: “This will change everything.” which was reason enough for Maggie to explore the death further, but when she finds out that Nour was a colleague and friend of Guttman’s, she realises that there is much more to the deaths than meets the eye. Maggie, accompanied by Guttman’s son Uri, embarks on a journey that involves a clay tablet that contains the answer to an unsolved riddle from the Bible. The answer to this riddle is feared by people on all sides, and could either bring peace or spark war.  END_OF_DOCUMENT_TOKEN_TO_BE_REPLACED

Actor Leonardo DiCaprio meets with scientists, activists and world leaders to discuss the dangers of climate change and possible solutions. A fascinating overview of the effects that climate change has already had and the ones that are to come. With a combination of interviews and trips to the Artic, India, Miami, Beijing and small islands, there has been a detailed investigation into a wide range of places and the effects that climate change has had on them. Although it is a serious documentary, it is produced in a cinematic and provocative manner, the music, DiCaprio’s monologues and the use of Bosch’s The Garden of Earthly Delights.  END_OF_DOCUMENT_TOKEN_TO_BE_REPLACED

Guest Post | Book Review Post by A Frolic Through Fiction
Ashleigh @ A Frolic Through Fiction is the first ever Guest Poster on The Humpo Show blog! 🙂 She has put together a wonderful post about her reviewing process of books, and all the tips of the trade she can pass onto other bloggers and reviewers. Be sure to give a follow on her blog, Twitter and Instagram!
And without further ado…

END_OF_DOCUMENT_TOKEN_TO_BE_REPLACED

Inferno Review
3.25 / 5
IMDb Rating: 6.5
Starring: Tom Hanks, Felicity Jones, Irrfan Khan, Sidse Babett Knudsen and Ben Foster.
Plot Summary: Academy Award® winner Ron Howard returns to direct the latest bestseller in Dan Brown’s (Da Vinci Code) billion-dollar Robert Langdon series, Inferno, which finds the famous symbologist (again played by Tom Hanks) on a trail of clues tied to the great Dante himself. When Langdon wakes up in an Italian hospital with amnesia, he teams up with Sienna Brooks (Felicity Jones), a doctor he hopes will help him recover his memories. Together, they race across Europe and against the clock to stop a madman from unleashing a global virus that would wipe out half of the world’s population. (Sony Pictures Entertainment) 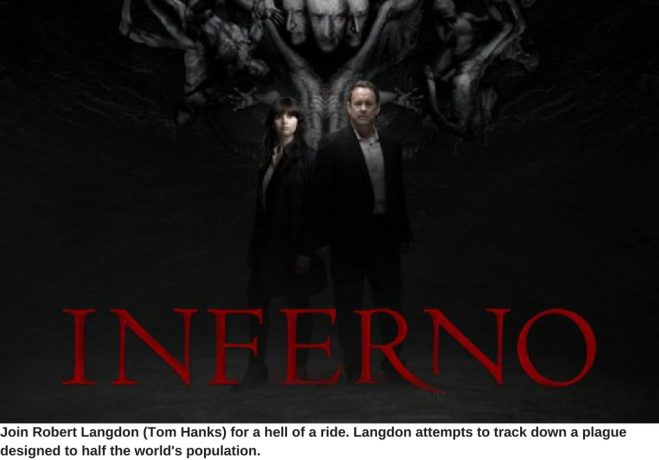 END_OF_DOCUMENT_TOKEN_TO_BE_REPLACED

Congratulations go to Megan @ bookslayerReads for winning my first ever Giveaway! The prize was Misery by Stephen King, Dark Places by Gillian Flynn and Monster by C J Skuse. There were 100 entries for this giveaway, which was more than I expected, plus I have gained some valuable knowledge about doing giveaways which I will bear in mind for future giveaways,

If want to keep an eye on future giveaways, I will probably use rafflecopter again, but I think I will use Instagram as well. Here’s my Instagram link if you don’t want to miss out on them. I follow back. 🙂  END_OF_DOCUMENT_TOKEN_TO_BE_REPLACED