A dark and tense final chapter which settles the future of Panem.

The incredible journey of Katniss Everdeen comes to a close in this eagerly anticipated Mockingjay Part 2. Following on from the stale Part 1 which was somehow deemed by Hollywood producers important and entertaining enough to be a film of its own, Part 2 is inevitably a more exciting prospect. But it differs from the earlier films, in that Katniss, Peeta, Gale and other rebels are making their way through  war-torn Capitol and threatened with a multitude of booby traps, while Snow and Coin are vying for the loyalty from the Panem populace. Part 2 is much darker, political and personal than the other films, and it brings to a close the epic Hunger Games saga.

If this war occurred in our whole, undoubtedly media outlets, social media and the people would have called this war The Mockingjay War, given the significance of Katniss, the insignia and her whistle. Part 2 is all about war. Part 2 is less spectacular than the first two films, in that it shows less blood-pumping action sequences which were especially characteristic of Catching Fire, given the clockwork structure of the arena. There is more focus and attention paid to the effect of war on the common people and the competing politicians’ agendas, which demonstrates Collins’ critique on warfare and the politicians involved in the orchestration of such events. Collins’ original novel and the film have plenty of differences, but the differences neither added or detracted from the storyline in a major way, or affected the standard of the film. Though some of the scenes included in the film that did not feature in the book were pretty pointless.

One aspect in the book that was superior to the film was the togetherness of the group that entered the Capitol. The group’s journey through the Capitol and their maneuvering through the myriad of dangerous pods that are interspersed along their route to Snow’s mansion takes up the most screen time, but we seen very little of any bond between the members of the group. The beginning of their journey through the Capitol, the black tar scene in particular, was spectacularly shot, but it seemed to stand out as a set piece rather than flow smoothly as part of the storyline. The two action sequences, the black tar booby trap and the mutt scene in the sewage tunnel network were both idiosyncratic of Hunger Games action, but those two were the only notable scenes, in this otherwise politically focused installment. The relationship between the group comprised of wistful looks at each other as they make steady progress further into the Capitol and keeping one eye on an unpredictable Peeta.

Jennifer Lawrence and Josh Hutcherson were both excellent again in their respective roles, Hutcherson in particular, as Peeta battles his inner demon that has been unleashed by the Capitol through a process called “hijacking”. The gradual rediscovering of Peeta was paced well and plausible, with credit going to both Peeta and director Francis Lawrence for the way they handled Peeta’s hijacking and his acclimatisation. Lawrence, was once again terrific as Katniss Everdeen, the Girl on Fire, the Mockingjay. Her internal fight with herself concerning Peeta’s condition and the lives lost in the name of the Mockingjay is evident, and her emotional moments are captured perfectly. Most notably, her dance with Prim, her meeting with Snow and her return to District 13.

Tense and stylish was the director’s apparent aim for this film, rather than the raw emotional immediacy that came with the two best films (Hunger Games and Catching Fire). Granted, that is in part to the Mockingjay book, which does not possess the unique Games format which has made it successful. However, the book manages to convey the Capitol’s pods, Peacekeepers and mutts as obstacles that make up the Capitol’s own Games scenario, but the film was not able to achieve this, even with Finnick saying “Welcome to the 76th Hunger Games”. The action was intense and typical of the last two films in attempting to establish a building crescendo of emotion that would be unleashed as they reach Snow’s mansion. But while in the book, the shock factor which came with the ending was brutally brilliant, the film lacked it somewhat and the moment passed too quickly. The film builds and builds but fails to achieve a big finish which would have ended the film in a blaze of glory. 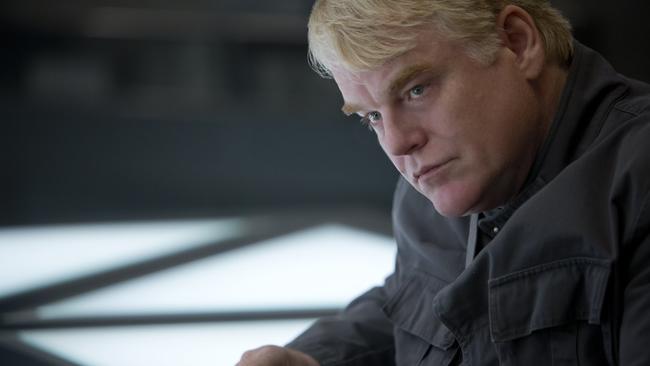 I will miss this genre-defying franchise that has expertly blended together an Orwellian view of politics and war, with the allegorising of the reality TV culture, to create this successful, slick and unique film series that will see it break the $3bn worldwide box office. The series has launched Jennifer Lawrence into the Hollywood spotlight which has seen her reap the rewards with her involvement in three David O. Russell films, which included a Best Actress Oscar in Silver Linings Playbook. Part 2 also seen the last film role of Philip Seymour Hoffman, who died while the film was still being shot. Hoffman played the perfect Plutarch, a masterstroke by the casting department, his quiet, clever and aware persona was depicted by Hoffman to a T.