This is the first time I am participating in a Top Ten Tuesday! I have seen many people I follow participate in this weekly challenge, and after seeing some of their posts today, I thought I would quickly rustle up my own Top Ten Tuesday post in response to this week’s challenge, which has been created by the blog The Broke and the Bookish. 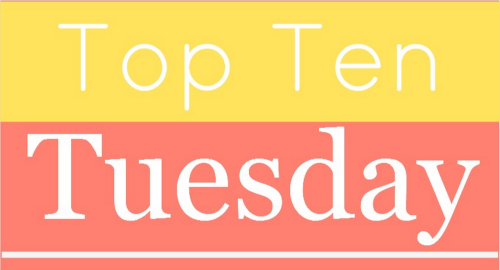 END_OF_DOCUMENT_TOKEN_TO_BE_REPLACED

Having read all of Arthur Conan Doyle’s Sherlock Holmes Collection and Anthony Horowitz’s House of Silk, I couldn’t pass up the opportunity to read a book devilishly titled Moriarty. Set in the immediate aftermath of The Final Problem, the scene of the dramatic showdown between Holmes and Moriarty at Reichemback Falls. Scotland Yard detective Athelney Jones and American Pinkerton investigator Frederick Chase form a determined partnership as they attempt to bring down an American criminal mastermind who has effectively taken over the criminal network created by Moriarty.

END_OF_DOCUMENT_TOKEN_TO_BE_REPLACED

“The game once more, is afoot.” Anthony Horowitz has encapsulated all that we love about Sherlock Holmes, his fantastical deductions, astonishing methods of enquiry and brilliance in obtaining the truest state of the facts as can possibly be attained. What starts off as a peculiar circumstance involving some destroyed Constable Paintings and a notorious Boston Irish gang, turns out to lead to a case which threatens both Holmes and Watson’s lives.

A plethora of villains tries to deny Holmes from finding the inconspicuous and ambiguous place, called the House of Silk. The severity of the investigation, which his brother Mycroft had warned them against taking on, comes to fruition and Holmes’ resourcefulness and unique talent for disguise and misdirection are exemplified. Holmes finds himself calling upon his talents as the claws of the criminal beast enclose around him, and threaten his life like nothing before, save his memorable show down with Moriarty at Reichenbach Falls in “The Final Problem”.

END_OF_DOCUMENT_TOKEN_TO_BE_REPLACED 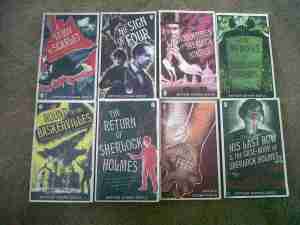 I have just finished reading the collection of novels and short stories of this phenomenal series by Arthur Conan Doyle. Holmes and Watson’s enthralling cases encompass 2,400 pages of mystery that leaves the disbelieving reader in awe of Holmes’ talents. Watson narrates their adventures where he describes a cacophony of remarkable abilities that Holmes possesses. The skills that he draws on include great powers of observation, theorising, deduction and logical reasoning which are displayed in full splendour as he tackles crimes, mysteries and fantastical complexities. Holmes’ role as ‘consulting detective’ sees an assortment of characters enter the rooms of Holmes and Watson’s at Baker Street, varying from: foreign royalty and influential politicians to people in the poorest realms of London.

Within the dense miasma of London in the Victorian era, multifaceted problems are brought to Holmes’ attention, for his magnificent and heralded skills are needed to decipher them. The role as “consulting detective” which he created for himself ensures that he can aid with problems that are not in the police’s jurisdiction but because he finds the challenge of these unusual and singular matters testing and fascinating. Watson chronicles their encounters into events of the people of London which bring them to their rooms as well as chartering his close quarters analysis of Holmes, and he recants Holmes’ explanations of how he uses his logical reasoning, observation and vast knowledge to come to his conclusions.

Doyle introduces an eccentric, intelligent and talented character who is Sherlock Holmes in his first novel “A Study in Scarlett”. It also sees the formation of the famous detective partnership of Holmes and Watson. The novel is split into 2 parts, which is a technique Doyle uses later in “The Valley of Fear”, though the novel is not considered Doyle’s best work, it nevertheless introduced us to Holmes and his outstanding abilities to solve crimes and mysteries through observing the minutest of details. The succeeding novel is my favourite of the four novels, “The Sign of Four”. I found the complicated and mystifying storyline really compelling and the way that Holmes conducted his investigation was truly remarkable. The intriguing plot consists of a secret pact made of four convicts, a stolen treasure and the characters’ service in the East India Company during the 1857 Rebellion. It is a spectacular book and I can not recommend it highly enough.

The Sherlock Holmes series, is one that I have thoroughly enjoyed reading and I have been especially fascinated with Holmes’ character and his exceptional abilities that unravel seemingly impossible scenarios that are of a criminal nature or just out of his personal investigative interest.