Thrilling racing around the forbidding Nürburgring racing track, rocket launches at Wallops Island and the tense finale that occurs in the labyrinthine railway network beneath New York City, which all contribute to a bloody brilliant Bond novel. There is of course, the inclusion of inevitably beautiful and tempting women, coupled with another aspect that is trademark Bond material, a diabolical enemy who is intent on causing destruction and loss of life. Trigger Mortis is a fantastic novel by Anthony Horowitz who has combined all those elements with the return of the dastardly organisation SMERSH to create an intoxicating story that would make Ian Fleming proud.

Horowitz has written so faithfully that this could quite easily be a lost Ian Fleming work that has been discovered and released. The writing style is absolutely on point in every chapter, paragraph, sentence and word. He has described everything from a bottle of wine to race car in fascinating detail which is a hallmark of Fleming. Even the outdated, politically incorrect phrases that feature in Fleming’s novels are included here, but they are included and handled in a seemingly less offensive way to conform to modern sensibilities. Though Trigger Mortis is very much in keep with the 1950s Bond books, Horowitz has managed to handle sensitive words to a modern audience deftly while maintaining the attitudes held by many of the time.

END_OF_DOCUMENT_TOKEN_TO_BE_REPLACED

James Bond is back again; this time he is given the task of uncovering any wrongdoings or possible plans to sabotage the most important project in Britain that has a ringing endorsement from the Prime Minister, the Moonraker. He arrives in Kent to replace a murdered Ministry of Supply security officer working on the project of the Moonraker. Bond has to use the competent Gala Brand to figure out what is going on and the role that the egomaniac Sir Hugo Drax has in it. 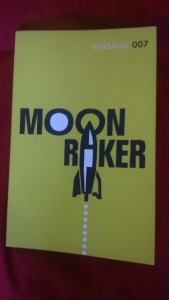