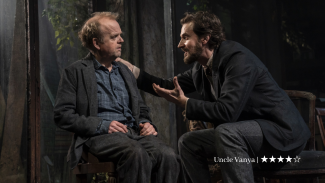 Uncle Vanya is a play by Russian playwright Anton Chekhov, first published in 1898, which explores the disruption and discontent of a small group of people in rural turn of the century Russia. Director Ian Rickson and Irish playwright Conor McPherson have brought this nineteenth century Russian play to London’s West End with a great deal of humour, melancholy and emotion. END_OF_DOCUMENT_TOKEN_TO_BE_REPLACED

Wicked tells the incredible untold story of an unlikely but profound friendship between two young women who first meet as sorcery students at Shiz University: the very popular Glinda and a misunderstood green girl named Elphaba. Following an encounter with The Wizard of Oz, their friendship reaches a crossroads and their lives take very different paths.  END_OF_DOCUMENT_TOKEN_TO_BE_REPLACED

Mischief Theatre hits on the magic formula of its ‘Goes Wrong’ show once again, this time with the assistance and expertise of legendary magicians Penn & Teller, for its new creation; Magic Goes Wrong. END_OF_DOCUMENT_TOKEN_TO_BE_REPLACED 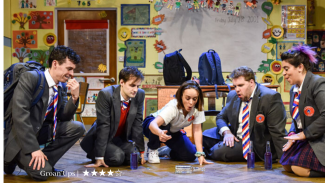 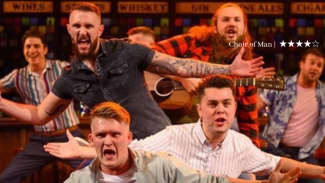 Welcome to The Jungle: Choir of Man is set in a pub and features a fun, high energy show based loosely around the friendships of a group of young men, their love lives and mental health. END_OF_DOCUMENT_TOKEN_TO_BE_REPLACED

The word, legend, gets thrown around a lot, but that is a perfectly fitting word to describe Sir Ken Dodd. The legendary comedian passed away in the early hours of this morning at the grand old age of 90, and he was still performing nationwide tours every year- an incredible feat! Immediately identifiable by his messy hair, his protruding teeth, joyous personality, and his red, white and blue “tickling stick”. He has entertained audiences for over 50 years.

END_OF_DOCUMENT_TOKEN_TO_BE_REPLACED

Mischief Theatre have done it again! They have been extremely successful in the last few years, seeing The Play That Goes Wrong take the West End by storm and spawning both a UK tour and a trip to Broadway; as well as having another original stage show in The Comedy About A Bank Robbery being met with similar adulation, and having two Christmas/ New Year performances filmed for the BBC, Peter Pan Goes Wrong, and A Christmas Carol Goes Wrong. Following on from these successes, is this improvised comedy called Mischief Movie Night, a comedy where the audience suggest a genre, location and title and the magnificent actors improvise and bring the show to life, complete with rewinds, fast forwards, directors cuts and a thrilling live score. END_OF_DOCUMENT_TOKEN_TO_BE_REPLACED

This review won’t be as extensive in relation to the plot as my previous review of this play to avoid repeating myself. This will be more of a commentary of the brilliant acting done by the new set of actors.  END_OF_DOCUMENT_TOKEN_TO_BE_REPLACED 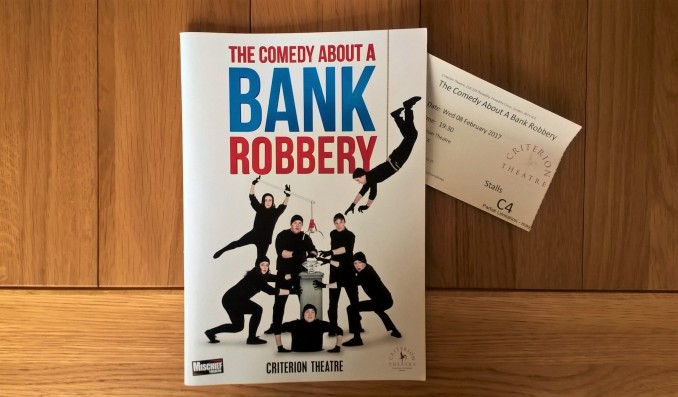 Starring: Hayden Wood, Adam Byron, Drew Dillon, Daniel Millar, April Hughes, Joanne Ferguson, Fred Gray and Oliver Llewellyn-Jenkins.
Plot Summary: The Cornley Polytechnic Drama Society are putting on a 1920s murder mystery, but as the title suggests, everything that can go wrong… does!  The accident-prone thespians battle against all odds to make it through to their final curtain call, with hilarious consequences! 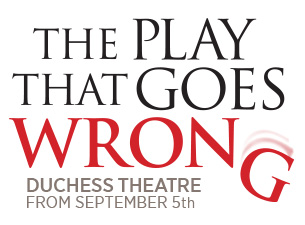 END_OF_DOCUMENT_TOKEN_TO_BE_REPLACED

Starring: Andrew Gower, Rudi Dharmalingam, Catrin Stewart, Hilton McRae, Rosie Ede, Joshua Higgott, Anthony O’Donnell and Daniel Rabin.
Plot Summary: Winston Smith wrestles with oppression in Oceania, a place where the Party scrutinizes human actions with ever-watchful Big Brother. Defying a ban on individuality, Winston dares to express his thoughts in a diary and pursues a relationship with Julia. These criminal deeds bring Winston into the eye of the opposition, who then must reform the nonconformist. (CliffNotes)

Update: If you are interested in going to see this, this page has information on the seating plan and the restricted views to help you make a decision on where best to sit.

END_OF_DOCUMENT_TOKEN_TO_BE_REPLACED

With it being my 100th post, I thought I would share some things about me, and I have done that through some top tens of films, books, songs, actors, actresses and places that I like. I also want to say thank you to all my followers that have made me feel that my blog is somewhat interesting and have left comments and liked my blog posts. I know this is a bit of a long post and I apologise for that, but I can assure you this will be the longest post I ever do … until the 200th!

END_OF_DOCUMENT_TOKEN_TO_BE_REPLACED

A perfect blend of poignancy, compassion, humour and love of life that is sure to stay with the audience long after they have left.

Bradley Cooper leads a brilliant cast in this hugely successful and critically acclaimed Broadway-to-London play, The Elephant Man. The Elephant Man was a wonderful example of theatre at its best, with crafted performances from all actors, tantalizing subtlety combined with the raw, moving and heart-wrenching moments that coalesce to make this brilliant play. 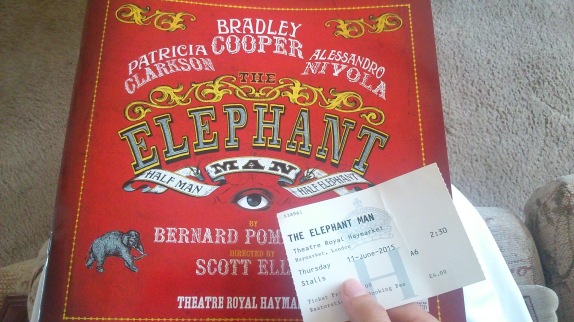 END_OF_DOCUMENT_TOKEN_TO_BE_REPLACED

After the success of The Crucible at the Old Vic Theatre in London, it has been released to some select cinemas in the UK. Having seen it once while in London and absolutely loving it, I had to see the Digital Theatre Version of it when it came to mine and Richard’s hometown, Leicester. And I can confirm it is equally astonishing even on the big screen.

END_OF_DOCUMENT_TOKEN_TO_BE_REPLACED

Arthur Miller’s The Crucible is an incendiary play that mesmerises audiences with grippingly intense performances from all of the cast and the haunting staging. The events of the Salem Witch Trials are the scene of a dramatic spectacle that holds everyone’s breath until the final curtain.

The premise of the play was the Salem Witch Trials in the 17th century, but Miller’s own life experiences contribute metaphorically through the Communist witch hunts in 1950s America. Simply staged, with furniture brought on when necessary, the audience’s gaze is focused on the actors and the text, and the unique Old Vic stage provides a closeness to the narrative as we are drawn further in to this fantastical production.

An ominous soundscape introduces a long wordless opening where we witness a sinister ritual performed by black servant girl Tituba (Sarah Niles). This ambiguous scene is the catalyst for a chain of wretched events that shake the bedrock of Salem that demonstrates the intractability of the religious fundamentalists, and shows that good people can be tainted by unfounded accusations motivated by jealousy and malice. From the opening sequence, the incessant hum and throb of the soundscape creates a dark and dull atmosphere, made murkier still with swirls of smoke and the grey drapes covering the theatre.

END_OF_DOCUMENT_TOKEN_TO_BE_REPLACED

Recently I have been to The Curve Theatre, Leicester to see a LAOS production of ‘The Wedding Singer’ and The Young People Company’s’The Dreaming’.

The Wedding Singer was a brilliantly funny and entertaining love story of Robbie Hart and Julia Sullivan. The story follows the ups and downs of Robbie and Julia’s lives and how they end up realising their love for each other. Robbie, is a passionate singer in a trio called The Wedding Band and he is the life and soul of the party until he is left at the alter of his own wedding. He then becomes downhearted and loses his faith in love, but a moving and amusing duet of “Come out of the Dumpster” with Julia perks him up and he falls for her. But Julia is already engaged to businessman Glenn. Who will she choose?

The entire cast performed admirably, in particular, Craig Thurlow (Robbie) and Sarrah-Jane Barton (Julia) whose vocals and acting were both of a high standard and shared a noticeable chemistry on stage. Also, Beverley Hewitt (Robbie’s Grandma) provided some brilliant body-popping and disco dancing of a much younger person and Beverley had the audience in bits with witty remarks and her mannerisms.

All in all, it was a very solid performance with the central storyline of Robbie and Julia and the musical numbers all performed brilliantly. The only criticism I can say is that the minor storylines within the musical were not acted to the same standard as the main storyline and lacked chemistry probably due to the lack of time together on stage in comparison to Robbie and Julia.

The Curve’s Young People Company performed “The Dreaming”, is a musical based on Shakespeare’s ‘A Midsummer Night’s Dream’ but reset in the Edwardian period. Unlike “The Wedding Singer”, this performance was not in the main theatre but in a studio which was to full capacity (approx 200) and as I entered, I was met by naturalistic lights and scenery similar to a woodland.

There are many stories within this musical set in a forest. Jack goes into a forest to join the spirits and he is asked to prove himself to Angel by finding a herb in the Woods and when it is smeared on the eyes of someone that it is sleeping, when they awake the first thing they see, they will fall in love with it.

There is a comical mix up with the young lovers: David, Jennifer, Alexander and Charlotte with each of the men being tricked into loving with Jennifer who no-one loved before. Another victim of the herb was Sylvia who falls in love with Nick (who had been turned into a badger).

Nick was part of amateur acting group who were practising in the forest a play called “The Ballad of St George” which was largely unsuccessful and amusing.

These young actors performed their part superbly, I particularly enjoyed the 4 lovers and their laugh-out-loud debacles of love. However, the one thing I think that didn’t go as well as it could have, was the fact that there were a lot of spirits (dancers) and due to the fact that it was performed in a studio hindered the amount of movement each of them could make. But despite that, I loved the enclosed environment and when every member of the audience stood and applauded for 5 mins at least after the closing number by the amateur acting group, you felt goosebumps.