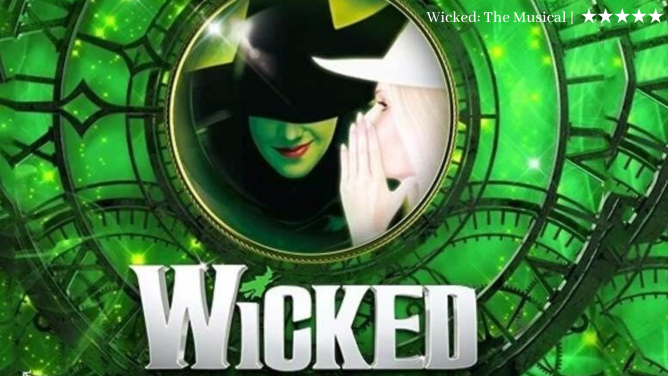 Wicked tells the incredible untold story of an unlikely but profound friendship between two young women who first meet as sorcery students at Shiz University: the very popular Glinda and a misunderstood green girl named Elphaba. Following an encounter with The Wizard of Oz, their friendship reaches a crossroads and their lives take very different paths.

When Dorothy triumphed over the Wicked Witch of the West, we only ever heard one side of the story. Gregory Maguire’s 1995 novel, Wicked: The Life and Times of the Wicked Witch of the West, re-imagines the Land of Oz, creating a parallel universe to the familiar story written by L. Frank Baum and first published in 1900. Maguire’s novel was turned into a Broadway musical show in 2003 and went on to win three Tony awards and a Grammy award. Idina Menzel played the role as Elphaba in the original run.

The musical came to London’s West End in 2006 and has been at the Apollo Victoria Theatre ever since.

I didn’t know any of the above before I took my seat in the audience. All I knew prior to heading in was that it was about the Wicked Witch of the West, Oz and the song ‘Defying Gravity’. Not much, to say the least!

Over two-and-a-half hours later and I walk out of the theatre, thoroughly impressed and wanting to see it again. From the very first song ‘No one mourns the Wicked’, I was lost in the array of wonderfully performed musical numbers, well-developed characters, funny tête-à-têtes, touching moments and an engrossing storyline.

Pick (a stand in for Nikki Bentley) and Woolf performed the roles of Elphaba and Glinda magnificently well. Both them sang their songs faultlessly and the pair’s head to heads and bickering provided much of the comic relief. I really enjoyed watching these two in particular (everyone was fantastic too!) as everything they did was exceptional and effortless. Of course ‘Defying Gravity’ was the stand out song and so it should be – Pick sung it perfectly – but another that really stood out to me was ‘The Wizard and I’, a really upbeat and well performed song. One more than I enjoyed was ‘Dancing Through Life’, which was complete with a wonderfully choreographed dance sequence.

I can’t find fault with any part of the musical, and I can’t wait to see it again along with some other big musical shows in London!

Wicked is well acted, full of great songs and there’s a good story that holds up for the entire duration. Get yourself to London (or Broadway) to see this amazing musical.