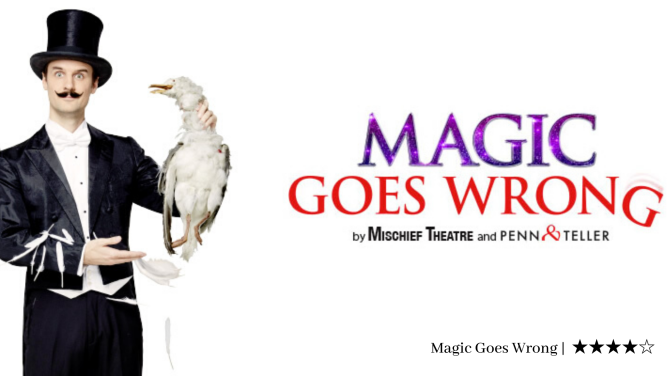 Mischief Theatre hits on the magic formula of its ‘Goes Wrong’ show once again, this time with the assistance and expertise of legendary magicians Penn & Teller, for its new creation; Magic Goes Wrong.

In this recent production, we sit and watch as a hapless gang of magicians present a charity event, and as the accidents spiral out of control, so does their fundraising target! I say ‘sit and watch’, but it was more like ‘fall off of your seat with laughter’. The plot, jokes and acting performances were all brilliant, and the magic was seamless and well-coordinated as well. Although not experts at magic, it did not show and I was scratching my head at all of the tricks.

For those that have seen this theatre company’s performances, you know how excellent they are at getting things to ‘go wrong’, but they take things to the next level with the added element of magic. This is displayed throughout, but there were some particular highlights that stuck with me long after my watching. There was the sawing a person in half trick that combined elements of magic, health and safety and comedy together in wonderful fashion. This scene left me in utter stitches.

I also have to mention how great the cast were with their back and forth the audience, in particularly Henry Lewis as the Mind Mangler. Some of the audience’s answers became a long-running gag of the show and I’m sure this is the case with every performance. Eventually, a couple of audience members take centre stage and the cast make sure that, despite the audience’s best efforts, whatever they do goes wrong too. The ending to the trick with two audience members involved was my favourite of all the endings and reveals in the show (tried to keep that vague as I really do not want to give anything away!).

Magic Goes Wrong is a magical concoction of mishaps, slapstick and the downright ridiculous, but it all works perfectly well. This show sits in my top three of Mischief Theatre productions along with The Play That Goes Wrong and A Comedy About a Bank Robbery, and that is no mean feat as everything they seem to do is wonderful. For a magical comedy, please watch it while you still can!