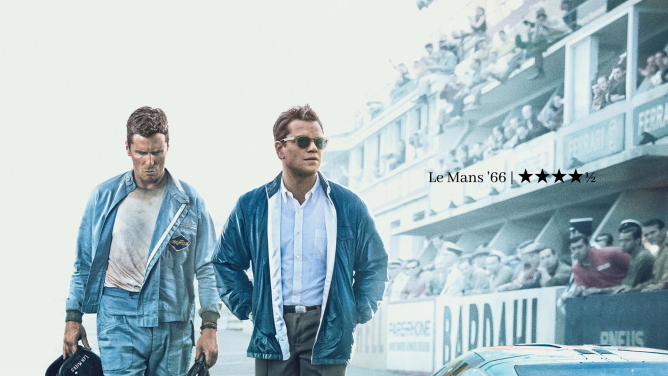 Le Mans ’66 follows an eccentric, determined team of American engineers and designers, led by automotive visionary Carroll Shelby and his British driver, Ken Miles, who are dispatched by Henry Ford II and Lee Iacocca with the mission of building the Ford GT40, a new racing car with the potential to finally defeat the perennially dominant Ferrari racing team at the 1966 24 Hours of Le Mans race in France.

An absolutely gripping film. My nerves were in shreds by the end as I felt like I was taking every corner, hitting 220mph on the straights and going head to head against a Ferrari in one of, if not the most, challenging races in motorsport.

Bale and Damon give great performances as the two leading men in the film and they present a believable and rigid friendship between their two characters. There are plenty of jokes, arguments and emotional moments concerning the pair’s characters and I was completely lost in their characters. Great acting!

The visuals and music ramped everything up another notch for the racing scenes. They are very intense and almost every shot has a fantastic score to back it up, and sound effects to get your heart pumping. Everything about this aspect of this film was top notch. I won’t be surprised if the film is nominated for sound design and editing. These technical aspects helped to make the climax of the film to be memorable and thrilling.

Le Mans ’66 is an exceptional ride of a film, filled with great performances from Bale, Damon and Bernthal, terrific action scenes and musical scores that easily take this film into my top 10 sport and racing films.