The second part of my Warsaw Travels with Ashleigh, sees us visit Lazienki Park, The Palace on the Isle, POLIN Museum, Saxon Garden and the Palace of Culture and Science. I hope you enjoy the photos, tips and information!

Łazienki Park was an amazing place to go. We could have easily spent many more hours wandering around all of the various pathways. The highlight was The Palace on the Isle, which sits at the centre of park. The palace was originally decorated with classicist paintings and items owned by King Stanisław II, an eighteenth century King of Poland. Despite many original paintings and objects not surviving the various owners, wars and centuries since then, there is still plenty for visitors to see, especially those that are influenced by Greek and Roman mythology.

Travel tip: there are regular buses and trams that travel from the centre of the city (Warsaw Centralna for example) to various points near the park, such as Plac Unii Lubelskiej 04 or 05, Plac Na Rozdrozu 01, 02 or 06, Lazienki Krolewskie 02, Agrykola 01 or 02, and Rozbrat 03. 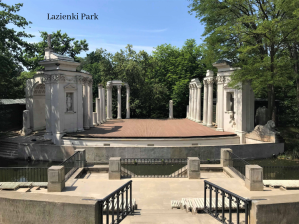 Łazienki Park is the largest park in Warsaw, and not only does it hold The Palace on the Isle, it also has a classical amphitheater, inspired by Greek and Roman architecture, with eight statues representing thinkers of antiquity. The stage, situated on an isle, is styled like a Roman forum and hosts…a noisy peacock!

As soon as we entered the park we were confronted by the Chopin Monument, which commemorates Frédéric Chopin – a nineteenth century Polish composer famous for his piano ballads.

Above are some photos of the interior of The Palace on the Isle. As you can see, it is a beautifully decorated palace, full of mythology-inspired ornaments. There are plenty of English language signs too for those that want to know more about each room without getting an audio-guide!

If you visit on a Friday, you can into the palace for FREE!

Above left is the POLIN Museum of the History of Polish Jews, a museum on the site of the former Warsaw Ghetto. It documents over a thousand years’ worth of Jewish history in Poland – once the largest Jewish community in the world – that was almost entirely destroyed during the Holocaust. This is definitely a place where you’d need to do multiple visits as doing the entire history in one visit just isn’t feasible – the main exhibition includes interactive installations, paintings, oral histories and plenty of original, authentic objects. A must-visit for those going to Warsaw.

The core exhibition is FREE to visit on Thursdays!

A place we visited a few times was Saxon Garden as it was in walking distance of our Airbnb. It is the oldest public park in the city. In the park are 20 sandstone statues including Astronomy, Bacchus, Flora, Geography, Glory, Intelligence, Justice, Venus and Winter. They were generally made before 1745 by anonymous Warsaw sculptors.

At the far end of the park is the elaborate fountain, which leads to The Tomb of the Unknown Soldier, dedicated to the unknown soldiers who have given their lives for Poland.

And finally, the last place we ‘visited’ was The Palace of Culture and Science, the tallest building in the whole of Poland – we didn’t go inside or to the observation deck, we just walked around the perimeter of the building while we waited for our train back to the airport. It was a ‘gift’ from Stalin following the Second World War. Locals don’t like the Soviet-style building as it reminds them of the Soviet influence during Stalin’s reign over Poland, and there is a popular saying which insinuates that the Palace’s observation deck has the city’s “best view because it’s the only place in Warsaw with no view of the building”.

Tickets to go to the viewing platform are: 20PLN (adult) and 15PLN (children).

I hope you’ve enjoyed both posts about Warsaw, and if you are interested in going there and have any additional questions, feel free to leave a comment and I will answer.