The History of Europe in Bite-Sized Chunks
Jacob F. Field 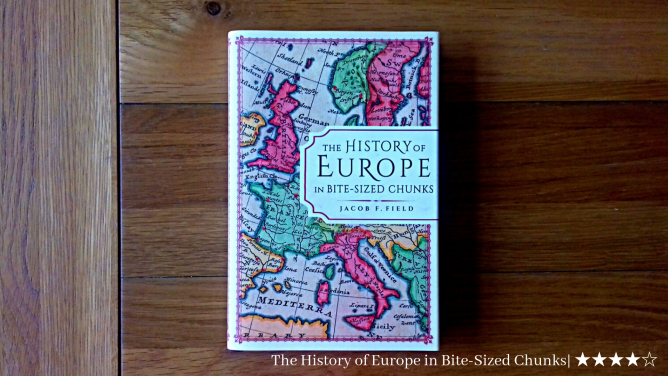 A readable and concise book that encompasses the histories of ancient civilisations all the way up to the modern European world, including Brexit. Jacob F. Field manages to cover thousands of years of history in an enjoyable and informative way, perfect for people who want an insight into every notable part of the continent of Europe.

Having read The History of the World in Bite-Sized Chunks earlier in the year, I was easily persuaded to get this next installment as I try to fill in some of the gaps in my historical knowledge. In particularly, I was eager to learn more about the Medieval era as well as the periods of Enlightenment and Revolutions.

History of Europe is also interspersed with some case study-like focus on notable Europeans, including Socrates, Julius Caesar, Charlemagne, Joan of Arc, Napoleon and Albert Einstein. These were helpful because they were very short and sweet, so there’s not much information to remember when reading these passages.

The only trouble I had when reading this book is that the information doesn’t sink in due to the fact that I have consumed so much history in such a short amount of time. If you asked me anything about the Belgian Revolution, I couldn’t tell you a thing! I kept notes for when I read History of the World, which I took in order to help to retain the information, but I’ve yet to go back to the notes, so I can’t confirm whether note-taking is helpful or not yet.

I thoroughly enjoyed learning more about The Crusades, the Crimean War and the Eastern Bloc in the 1950s and 60s. I only had extremely basic knowledge about The Crusades and the Crimean War, but this book was extremely helpful in providing a succinct summary of both events, and these are two parts that I do remember most. The Eastern Bloc following the Second World War is something I knew nothing about, anything I did know would be guesswork. Field easily conveys the important things of note so that I now feel more confident about this part of European history. This point also leads into the 1989 Revolutions, post-Soviet Russia and the Yugoslav Wars – more areas where my knowledge was definitely lacking and has since been boosted by Field’s analysis.

Field’s creation is interesting and concise – perfect for someone who wants to learn more about the continent of Europe. There is also a thoughtful analysis of European integration and of the UK’s prolonged exit from the European Union.

Chocolate tart has definitely filled me up 🤤 Thank you for the recc @liblobandthe123s 👌 will have to bake it again when we're back in the office!
The lockdown has definitely helped with me reading more 📚 #bookstagram #bookstack #currentlyreading
With this week's #Masters cancelled 😭 and golf courses around the world closed due to the virus, this issue of 𝑮𝒐𝒍𝒇 𝑪𝒐𝒖𝒓𝒔𝒆 𝑨𝒓𝒄𝒉𝒊𝒕𝒆𝒄𝒕𝒖𝒓𝒆 is timely for those in need of their golfing fix...especially with golf course photography like this! #golf #golfcoursearchitecture #golfcourses #golftravel #golfcoursephotography #instagolf #lesbordes #unionleaguenational #costapalmas
%d bloggers like this: