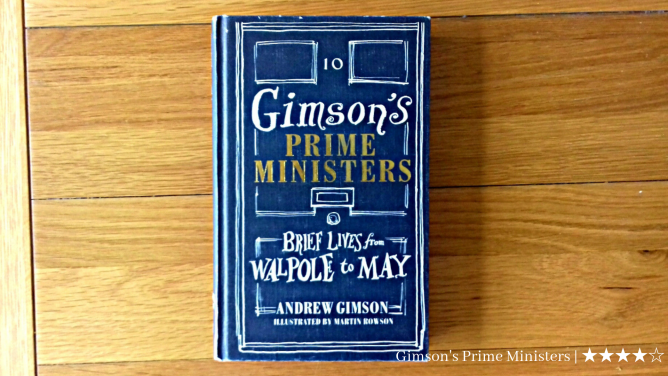 Gimson’s Prime Ministers offers a concise, sharp-witted and illuminating account of the lives of Britain’s prime ministers from Walpole to May. This lively and entertaining book presents parliamentary history in a vivid and clear manner, helpful for anyone interested in the lives of the people that held the keys to 10 Downing Street.

This 300-page book covers all 54 British prime ministers from 1721 through to 2019, averaging just under six pages per PM, is a worthwhile read for anyone interested in gaining more knowledge about the history of Britain and its elected leaders.

There are the PMs that are looked on as successes, such as Pitt the Younger who faced down revolutionary France; Early Grey who oversaw the 1832 Reform Act and the abolition of slavery; and Winston Churchill, the man that successfully led the country against the rise of fascism. And there are others that are considered failures, deserved or otherwise, for example Lord North who presided over the loss of the American colonies; Anthony Eden who was humiliated during the Suez Crisis; and Theresa May, who is currently bungling the task that was left to her three years ago – Brexit.

Gimson provides the necessary details in the six pages that each PM gets. We read about their upbringing and education, their route into politics and the progression of said career, and finally, the important events of their prime ministership, policies and eventual downfall. His engaging writing style makes each chapter readable and…fun.

Like many people, my knowledge of Britain’s past leaders is far from comprehensive. I’ve heard a great deal about Margaret Thatcher and Winston Churchill as they are still within living memory for many people in this country, and I obviously know enough about David Cameron, Gordon Brown and Tony Blair as they’ve held the office during my lifetime. But for others like Lord Bute, Lord Liverpool and Pitt the Elder, to name a few, I know practically nothing about them. And although, I’ll have probably forgotten most of what I’ve read by this time next week, some important knowledge will hopefully stick in my head!

Gimson writes with great wit and elegance, and this is complemented by the funny and well depicted illustrations from Martin Rowson, helping to make it a great read and one I would definitely recommend.