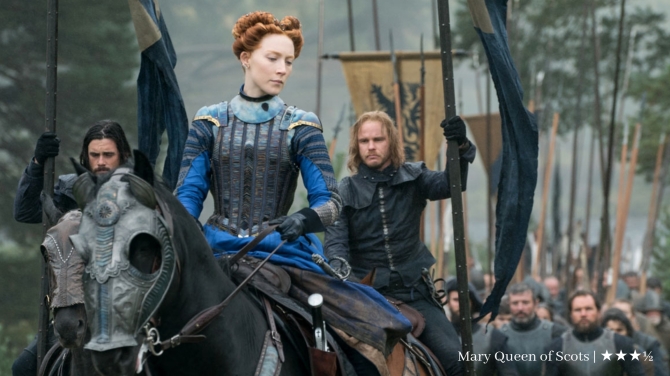 Mary Stuart (Saoirse Ronan) and Queen Elizabeth I (Margot Robbie) were monarchs of Scotland and England during the sixteenth century. The film showcases the struggle for power, the importance of succession, the religious conflicts and the maneuvering by men in an effort to wrestle power from the female monarchs.

The gorgeous costumes and Scotland’s landscape help to deliver a Game Of Thrones-esque vibe with its focus on the thirst for power in an era where two queens compete and defend crowns. An earthy and convincing quality to the film makes the time period feel all the more realistic.

Having read around the history and time-frame that the film is portraying – as well as many reviews from angry critics – I can see that there has been plenty of poetic licence employed. The list of inaccuracies is surprisingly extensive, everything from Mary having a Scottish accent despite growing up in France, the fact that Mary and Elizabeth never actually met; and the diverse cast of colour within English and Scottish courts, which wasn’t accurate for the period.

The liberty taken with history wasn’t much of a problem for me, both leading performances by Ronan and Robbie were fantastic. Ronan’s defiant character has a very modernist viewpoint and she is the star of the film. She is so assured in the role of the Scottish queen – I couldn’t take my eyes off her in every scene.

A worthwhile watch for history lovers. The acting performances and scenery are the stand outs for me. The inaccuracies may bug some, but I did not mind, as their inclusions added to the drama.