I have recently returned from a long weekend away in Berlin where I managed to hit plenty of the city’s tourist spots.

I stayed in Samariterstraße – five stops away from the main city centre of Alexanderplatz – and it is located in the district of Friedrichshain. The apartment was across the street from the Samariterkirche – a 19th century church. The location was fantastic as I could travel to Alexanderplatz quickly and easily, which is the central hub for the S-Bahn trains and the U-Bahn underground trains.

Top Tips: €30 7-Day ticket travel on S and U-Bahn, or €7 all day ticket. Validate them by inserting them into the red machine typically next to the ticket machine – they’ll be stamped and that is all you need to travel all day, no need to get it validated again that day, just hop on and off any train you like. There are no ticket barriers.

The first part will focus on the Bundestag, Brandenburg Gate, Holocaust Memorial, Checkpoint Charlie, BlackBox Cold War and the Topography of Terror. 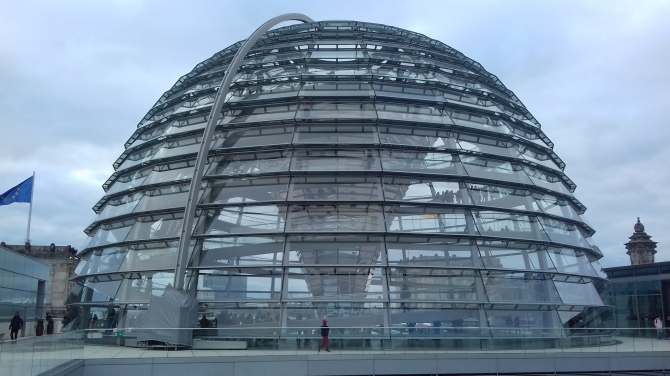 I went on a tour of the Reichstag dome that can be seen at the top of the Bundestag. It has fantastic views of Berlin as well as detailing the history of Germany, the government, and the architecture of the building and dome. We could also look down through the glass floor into the debating chamber of the German government.

The Bundestag was my favourite part of my travels in Berlin – it was great to be in such a historic building, to see the centre of German politics and to listen to my free British audio-guide detailing my every step around the dome.

A favourite tourist spot for millions.

Memorial to the Murdered Jews of Europe
To visit: Free

Also known as the Holocaust Memorial. It consists of a 19,000-square-metre (200,000 square foot) site covered with 2,711 concrete slabs arranged in a grid pattern on a sloping field. It is located one block south of the Brandenburg Gate.

There is a cheap food stand on the same side as McDonald’s and it serves traditional German sausages. Get yourself a currywurst and chips – good value and authentic!

Checkpoint Charlie
Nearest transport: Kochstraße/Checkpoint Charlie (U-Bahn); U Stadtmitte (U-Bahn); and a walkable distance from Potsdamer Platz (S-Bahn and U-Bahn)
To visit: Free (although to have a photo with the US soldiers requires a small fee)

The world famous crossing point between East and West Berlin during the Cold War. The Soviet Union constructed the Berlin Wall in 1961 to prevent East Berliners emigrating or defecting to the West. Checkpoint Charlie is extremely busy with tourists and reminded be of the carnage near Big Ben and Westminster Abbey in London.

Across the road from Checkpoint Charlie, this small black, box-shaped building is dedicated to the Cold War and features authentic exhibits. At €5 it is well worth it as the videos that are playing, the authentic objects from the conflict, and also the information displayed on the walls and through visuals. 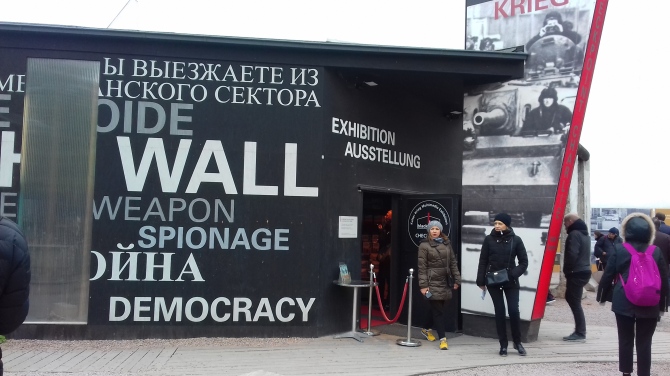 The museum is built on the site of the following buildings, which during the Nazi regime from 1933 to 1945 were the SS Reich Main Security Office (paramilitary organisation created by Hitler and led by Himmler), the headquarters of the Sicherheitspolizei (security police), SD (intelligence service of the Nazi Party), Einsatzgruppen (death squad) and Gestapo (secret police created by Göring).

The Berlin Wall ran along the south side of the street, the remaining part of the wall is one of the longest stretches of the Wall left in Berlin.

The museum details the history of the organisations that had their strongholds in this area of Berlin. It is a very interesting place with plenty of information and images. A must visit!

All of the places above are easily navigable with plenty of signs in English.

13 thoughts on “Berlin Travels [Part One]”