James Patterson is the master of the thriller. He, again flexes his storytelling muscles in his latest Alex Cross mystery. This time Alex is on trial for murder as he becomes the victim of a witch-hunt among the public, media and government that are trying to put away a high-profile cop who has killed in the line of duty, which they are portraying as a unnecessary show of force. Alongside his trial, his former work partner Sampson asks Cross for help in his investigation into a string of young, blonde women that have gone missing and have appeared in depraved videos on the Dark Web. Cross attempts to prove his innocence at the same time as risking his career and life while helping to uncover where these missing girls are. 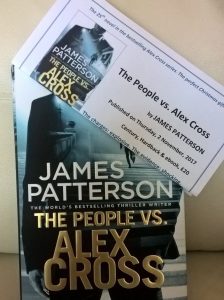 In typical Patterson fashion, The People Vs. Alex Cross exudes mystery and heart-racing action with every chapter as the two storylines progress at a rapid pace as the trial gears up to its conclusion and as the blonde women investigation draws close to the dramatic finale. Both storylines hold up well and they balance each other in a way that does not detract from the other. The trial is tense and interesting as we as readers are trying to deduce how Alex Cross is going to be proved innocent, even when the evidence continues to stack up against him. While this is going on, the investigation’s progress inches along with Cross and Sampson hitting as many walls as well as inroads, which makes the elusive criminals behind the evil website on the Dark Web even more dangerous and their comeuppance even more anticipated.

I was surprised by how many times I was tearing up. Whether it was for the blondes that were subjected to the horror and torment, the families affected by it, or in Alex’s family life where everyone had been affected by the trial. The moments concerning Gretchen’s captivity and also her family were particularly emotional. It is not often that a mystery-thriller has the reader swallowing hard, trying to hold back the tears for the victims of the antagonist’s evil deeds. The storytelling and writing must be commended for it to have caused that reaction.

The People Vs. Alex Cross is another thrilling inclusion in the Alex Cross canon, and the storylines are probably one of my favourites in terms of suspense and the flow of the story. Very rarely did I put this down for any reason apart from meals, as I was desperate for Cross and Sampson to nail the people behind the sick videos and to make sure they received a just ending.