Starring: Andrew Gower, Rudi Dharmalingam, Catrin Stewart, Hilton McRae, Rosie Ede, Joshua Higgott, Anthony O’Donnell and Daniel Rabin.
Plot Summary: Winston Smith wrestles with oppression in Oceania, a place where the Party scrutinizes human actions with ever-watchful Big Brother. Defying a ban on individuality, Winston dares to express his thoughts in a diary and pursues a relationship with Julia. These criminal deeds bring Winston into the eye of the opposition, who then must reform the nonconformist. (CliffNotes)

Update: If you are interested in going to see this, this page has information on the seating plan and the restricted views to help you make a decision on where best to sit.

Orwell’s dystopian nightmare continues to resonate in this world of ours, with its unmistakable themes of constant surveillance, the unchecked power of the elite, a dominant single socio-economic ideology, media manipulation, and the punishment of any dissenting voices. Nevertheless, despite these depressing themes that are inherent throughout Orwell’s masterpiece, this production gives a jolting and shocking take of this classic, with a plethora of stage techniques which compliment this type of story perfectly.

Winston’s apprehension and fear is palpable enough to translate to the audience, leaving the audience gripping their seats, expecting and waiting for an action or reaction from the omniscient and omnipotent Party. In this regard, Andrew Gower does exceptionally well, the manic and frantic monologues he has with himself, as well as frenetic exchanges with other characters helps to build the anticipation to the inevitable conclusion of the story. The Room 101 scene in particular highlights the great performance Gower produces in his role as Winston. 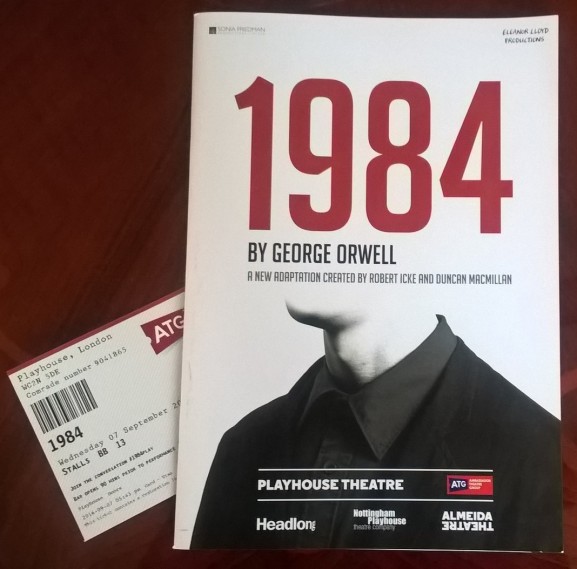 One aspect which sent shivers down my spine and caused the hairs on the back of my neck to stand up, was the visual and sound effects. Although, my experience was hindered by sitting on the front row (£10 last minute ticket) and being closest to the speakers, the overall effect of the sights and sounds created by the production team created an incredible feel which helped to make the play seem more dynamic. The visual presentation, not only onstage, but backstage as well, took the phrase “making good use of the stage” even further. The backstage scenes where Winston and Julia are in the rented room are displayed on the huge screen above the stage. This screen is also used very effectively for the various propaganda announcements from the Party to the masses. The overall management and presentation of visual and sound effects is exemplary, and both of these add to this relevant and gripping play that whizzes through the 101 minute performance time.

An energetic play that races through this fascinating story by Orwell, which still has themes that continue to draw full focus even in the twenty-first-century. Robert Icke and Duncan MacMillan, the people responsible for this depiction, deserve credit for their portrayal of this classic, and to express it such a confident and exhilarating manner.