The first edition of Short TV Ratings includes War and Peace, The Night Manager, Churchill’s Secret and The People and OJ Simpson. 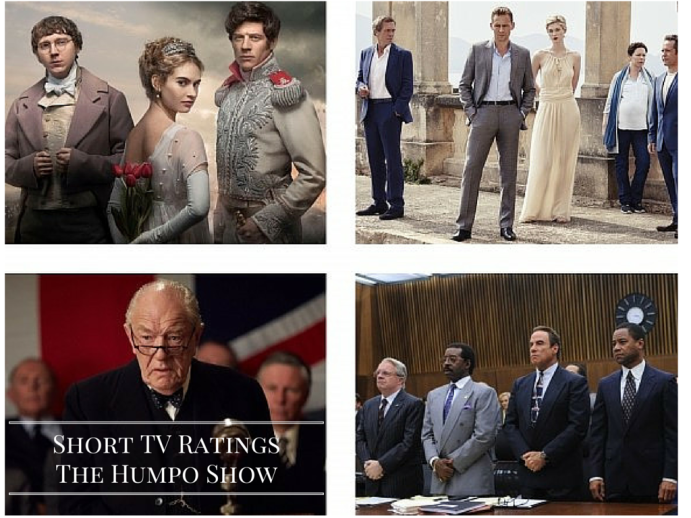 “Russia 1805. When Pierre (Paul Dano), Natasha (Lily James) and Andrei (James Norton) are first introduced to viewers, their youthful ambition, despite their privileged circumstances, is to find meaning in their lives. Kind-hearted but awkward Pierre, the illegitimate son of Russia’s richest man, wants to change the world for the better. The spirited Natasha is searching for true love, while handsome and gallant Andrei, frustrated with the superficiality of society, seeks a higher purpose.

At the same time, Napoleon’s army edges ever closer to Russia’s borders. As everything they thought they knew is thrown into question, Pierre, Andrei and Natasha find themselves in a time when Russian lives are about to change forever.”

The excellent performances from the 3 lead actors is perhaps the standout thing to take away from this series, though the overall production has also been exemplary. To condense Tolstoy’s epic into 6 episodes is a great achievement and every second of the series has been on point. Not a second has been wasted, and often the silences have been equally mesmerising as the all-out action.

“Former British soldier Jonathan Pine (Tom Hiddleston) is recruited by Angela Burr (Olivia Colman), an intelligence operative. He is tasked to navigate Whitehall and Washington D.C. where there is an alliance between the intelligence community and the secret arms trade. He must infiltrate the inner circle of arms dealer Richard Onslow Roper (Hugh Laurie), Roper’s girlfriend Jed (Elizabeth Debicki), and associate Corkoran (Tom Hollander).”

Based on John Le Carre’s novel of the same name and devising of a strong cast, The Night Manager is the most thrilling and fascinating programme on TV at the moment. It feels as if this is Tom Hiddleston’s audition for the James Bond role, and I must say he is doing a brilliant job so far. Each episode has been brilliant and there has been a real sense of danger throughout both with Hiddleston’s and Colman’s characters. There are two episodes remaining in the series and the 8 million watching audience are keen to see a thrilling finale that is undoubtedly on the cards.

“In summer 1953, some eighteen months after Churchill has been elected Prime Minister of the United Kingdom for a second time, he suffers a serious stroke. Though his illness is kept as secret as possible his political friends and foes begin to plot his successor when it is unclear whether he will recover or not. He is nursed back to health by Millie Appleyard.”

A fascinating part of British history which was largely unknown to me and I’m guessing plenty others.. Gambon was brilliant in the role as Churchill. Though based on real events, the fictionalising inclusion of Millie among other things added to an interesting story which has had some light finally shone onto it. The mindset of Churchill and the relationships with other family members were fascinating to watch and all in all, made for an interesting watch.

“The season revolves around the infamous murder trial of O. J. Simpson, and is based on Jeffrey Toobin’s book The Run of His Life: The People v. O. J. Simpson.”

Having been born in England in the early 90’s, I have not had much contact with this controversial story. Famously named “the trial of the century”, I have gone into this programme and trial with fresh eyes having not known much about the case, other than the verdict. In the UK, the series has just gone past the halfway point, and so far, given what I have watched (taken with a pinch of salt) I am inclined to believe that he is guilty. Of course there is still more of the series to go and I don’t know what else is to come, but from what I have watched in the programme, it seems that the defence team are using the race card, the media and underhand tactics concerning forensics to win the case.