X-Wing Starfighters maneuvering skilfully through the air, emotionally-strung lightsaber battles, the Millennium Falcon attempting the impossible and a mysterious Dark Jedi stopping a blaster’s shot tantalisingly in midair. The new Star Wars film is undeniably a Star Wars film, but with the added ingredient of cutting-edge CGI that is blended well with the idiosyncratic elements of the original trilogy in a similar way the the old cast and new cast are brought together. The Force Awakens provides hope that the Star Wars fans will receive a high standard trilogy of films that do the original trilogy justice, and are a brilliant addition to the canon.

The two most impressive parts of the film was the two new heroes and stars of Star Wars, Finn (John Boyega) and Rey (Daisy Ripley). The pair make great strides in this film in establishing themselves as the frontrunners in this new era of Star Wars, and taking over the mantle from Han, Leia and Luke, though these three will certainly have a supporting role in the upcoming films. I also expect to see Poe (Oscar Isaac) become a key figure in the films to come, and possibly become strong friends Finn, as they already have build a strong rapport with each other in their scenes together. An aspect which also impressed me was the comedic dialogue which is mainly transmitted through the burgeoning friendship between Finn and Rey, as well as Han as the pair’s mentor. There were a few scenes in particular that showcased the light-heartedness that is used well in between action scenes, my favourite was their initial meet-cute in which the pair already exhibit signs that they could be good friends. As the film progresses, they seem to enjoy a bond, close to siblings, which is a nice change to that of love interests that are commonplace throughout filmmaking.

Star Wars delivers a shock moment that will make The Force Awakens a memorable addition. Han Solo’s death at the hands of his son Kylo Ren. Ren is in an interesting place now, at the beginning of the film he showcased his strong ability with the Force through stopping a blatser in midair, something that I don’t think I have seen in any Star Wars film. However, he is also more vulnerable and a more three-dimensional character, and is not a villain through and through as he doubts himself and his ability in a few scenes. One of which is the most shocking scene in the film, Han’s death. He has just killed his father despite battling a mixture of feelings inside him. but rather than becoming stronger for it, he has become even more conflicted, so much so he is out-fought in a lightsaber duel with Rey, who has only just begun to realise she has an affiliation with the Force. Therefore, it’ll be interesting whether he turns to the good side of the Force, or ends up dead, as Supreme Leader Snoke wants him to become a pawn for him. but he doesn’t seem to have the mindset for it. Snoke seems very similar to the Emperor, but he has yet to feature in his in person yet. 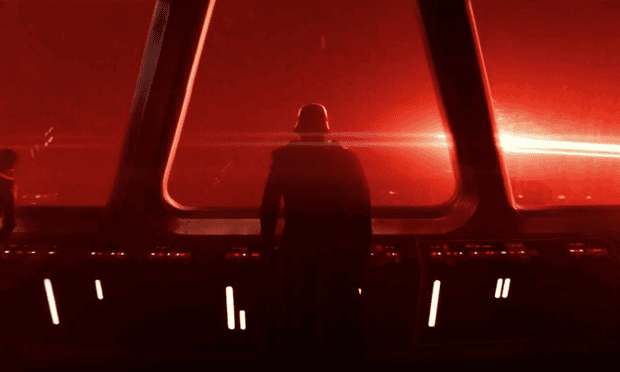 There were some disappointing aspects of the film, notably the similarity between Starkiller Base and The Death Star, which is a feat that has been repeated in A New Hope and Return of the Jedi. I hope this is the last time that we revisit the same story dynamic again. This similarity goes further still, in the destruction of the base as well, as a pilot does a seemingly impossible thing of going through a slim section of the base until he reaches the centrepoint which he then destroys. Again, this is reminiscent of both Episodes IV and VI.

But those similarities aside, the film has the right amount of nostalgia and nods to the members of the past films, while also realising that new heroes are needed for the new era of the franchise. This is no more emphasised in the embrace between Leia and Rey near the end of the film, it is almost a visible sign of passing on the baton to the new heroes and for them to bare the burden and responbility of being part of the most successful franchise ever. And when Rey meets the elusive and reclusive Luke Skywalker on a distant planet, we see once more the changing of the guard. Luke now appears to be the old master who will impart his knowledge of the Force over to Rey, whose character already has mysterious parentage questions that haven’t been answered yet, and it is the final act that demonstrates the old and new Star Wars.

The Force Awakens, brings hope that this batch of films can deliver where the prequels failed and reach the heights of the original trilogy which it will undoubtedly be measured against. The film has a new trio of heroes Rey, Finn and Poe, and the actors all deliver their respective parts impressively and heroically. A new conflicted villain Kylo Ren, who is strong with the Force but is emotionally inconsistent, and his path to light or dark is now a debated feature in the films to come. General Hux, who seems to be a the most ruthless and disciplinarian leader that we have seen, his speech to announce the First Order’s plan was eerily reminiscent of a Nazi Party Rally. He could become the longest serving General of “bad side” due to his personality, something that is apparent in his relationship with Ren. And finally, Snoke. His brief appearances with Ren and Hux show some similarity with the Emperor in appearance, voice and aim, so I am sure that there’ll be plenty of twists and turns in the films to come, and I would not be surprised if the next film is anything like The Empire Strikes back. I for one can not wait for the next installment, and I have no doubt that this new trilogy will do justice to the original, while also establishing itself its own place in the film industry, and not just for the huge box office figures.