Anne Hathaway turns 33 today! The beautiful and talented actress is the feature of another one of my Tribute posts. I have included 5 of my favourite films/performances of her, a list of fun facts about her and a mixture of funny videos and videos demonstrating her immense talent. 🙂

Here are 5 of my favourite Anne Hathaway performances in films that I have seen. 2 films that I haven’t seen of hers but want to are Brokeback Mountain and Interstellar (I got it on DVD for my birthday!) I also quite enjoyed Becoming Jane, Valentine’s Day and Alice in Wonderland. Let me know which film of hers you enjoyed the most.

Shy San Francisco teenager Mia Thermopolis (Anne Hathaway) is thrown for a loop when, from out of the blue, she learns the astonishing news that she’s a real-life princess! As the heir apparent to the crown of the small European principality of Genovia, Mia begins a comical journey toward the throne when her strict and formidable grandmother, Queen Clarisse Renaldi (Julie Andrews), shows up to give her “princess lessons.” A lovely film, and also Anne’s first ever film. It is a very sweet film and it is very quoteworthy, whether it be comical and hilarious or the meaningful and heartfelt. 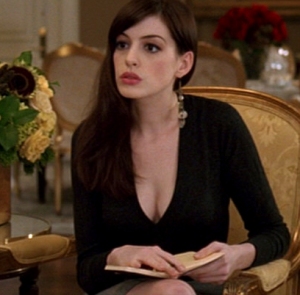 Andy (Anne Hathaway) is a recent college graduate with big dreams. Upon landing a job at prestigious Runway magazine, she finds herself the assistant to diabolical editor Miranda Priestly (Meryl Streep). Andy questions her ability to survive her grim tour as Miranda’s whipping girl without getting scorched. Meryl and Anne are a great working team in this comedy-drama which is actually the most expensively costumed film in history due to the plethora of fashion clothes and accessories appearing in the film.

On July 15, 1988 — the day of their college graduation — two people from opposite sides of the tracks begin a lifelong friendship. Emma (Anne Hathaway), an idealist from a working-class family, wants to make the world a better place. Dexter (Jim Sturgess), a playboy, thinks the world is his oyster. For the next 20 years, the two friends reunite on the 15th of each July, sharing dreams, tears and laughter — until they discover what they’ve been searching for, each other. Although some critics bemoan her accent in the film, I still enjoyed the film for what it was, a romantic-drama with plenty of comedy mixed in. The idea is a novel one and competently done, and Anne and Jim Sturgess make good lead actors.

It has been eight years since Batman (Christian Bale), in collusion with Commissioner Gordon (Gary Oldman), vanished into the night. Assuming responsibility for the death of Harvey Dent, Batman sacrificed everything for what he and Gordon hoped would be the greater good. However, the arrival of a cunning cat burglar (Anne Hathaway) and a merciless terrorist named Bane (Tom Hardy) force Batman out of exile and into a battle he may not be able to win. In this box-office blockbuster, Anne is Catwoman (a very sexy one at that!) and she plays the role devilishly well. An amazing film, the highest IMDb rated film in her repertoire, she slots in perfectly in the final film of the Christopher Nolan directed/ Christian Bale acted Batman trilogy.

After 19 years as a prisoner, Jean Valjean (Hugh Jackman) is freed by Javert (Russell Crowe), the officer in charge of the prison workforce. Valjean promptly breaks parole but later uses money from stolen silver to reinvent himself as a mayor and factory owner. Javert vows to bring Valjean back to prison. Eight years later, Valjean becomes the guardian of a child named Cosette after her mother’s (Anne Hathaway) death, but Javert’s relentless pursuit means that peace will be a long time coming. Although Anne is only on screen for 15 minutes, her exceptional performance bagged her an Oscar. This incredible musical adapted for the big screen is my favourite film on the list, and it is undoubtedly the best performance of Anne’s, especially the scene/song I Dreamed a Dream, where she has her hair cut while filming in an effort to convey a brilliantly realistic and believable performance.

Anne has won 65 awards and had 89 nominations. The most notable awards she has won were the Oscar, BAFTA, Golden Globe for Best Supporting Actress (Les Miserables).

2 : Anne Hathaway kept the butt pads she wore to become a ”Fat Size 6” as fashion assistant Andy in The Devil Wears Prada. “I have every good intention to have it framed,” she told Harper’s Bazaar, “and have a little plaque underneath it that says, ANDY’S ASS.”

3 : She is the youngest person to have hosted the Academy Awards. She co-hosted in 2011 alongside James Franco when she was 27 years old.

4 : She won her Oscar for Les Miserables despite being on screen for 15 minutes.

1 : Anne’s Paparazzi Rap on the Conan Show…in the style of Lil’ Wayne!

2 : An embarrassing but hilarious story involving Anne and Daniel Craig.

3 : Here she is in Hugh Jackman’s amazing Opening Number at the 2009 Oscars.

5 : And finally, the amazing performance of One Day More at the 2013 Oscars of the cast of Les Miserables.