Subtle Knife is a sharp, exhilarating and a thoroughly gripping adventure novel.

This novel has plenty of cutting edge, with stimulating robberies, fights and chases that all contribute to an incredible adventure fantasy novel that is in the higher realms of the genre. You could say it is a cut above the rest. The novel deals with the objection to a higher authority that has ruled worlds without challenge or question until Lord Asriel’s controversial actions at the end of Northern Lights that reverberated in many worlds, his rebellion against The Authority is a belief shared by many and his actions are on point. The sharpness of this novel is evident in the rotation of perspectives to keep the reader on the edge of their seat by throwing up chapter cliffhangers and diving into another character’s own problems or plans. The cut-throat nature of no characters being safe or certain of being a hero in the finale of Amber Spyglass also adds a sense that this novel is determined to be hard-fought, thrilling and an incredible journey for everyone concerned. I’ll take a stab and say you’re already sick of the knife puns? I’ll stop now, just please don’t leave any cutting remarks in the comment section… 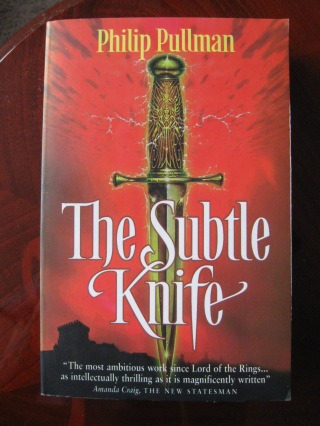 Northern Lights was a fascinating book with Pullman creating a magnificently thought out world and all of its intricacies perfectly described and explained in minute detail. The plot lived up to Pullman’s brilliant creation, with action aplenty and also a deep and far-reaching reason for writing Northern Lights and the Dark Materials series. He has evidently wanted to create a superb masterpiece that will stand the test of time, much like the works of C. S. Lewis and J. R. R. Tolkien. The Subtle Knife progresses on from the Northern Lights, and I believe it is an even better story, as a kaleidoscope of storylines converge or almost do, mirroring the events concerning the parallel worlds. Pullman has done something that all the creative writers do when writing an incredible series, and that is to create an emotional bond between the readers and the main characters, but also the supporting ones too. He achieves this through flitting between different people’s perspectives as they embark on their separate but also connected journeys. The reader of course is rooting for Lyra, and now Will, but through the course of The Subtle Knife, the reader also feels compassion for Lee Scoresby, Serafina Pekkala, Stanislaus Grumman and Dr Malone. By creating characters who the readers will emotionally attach themselves to in terms of the wider scope of the story in relation to Lyra and Will, Pullman has made the series that much more special for the readers as they are now invested in several characters’ storylines.

A particular device which Pullman uses in a way goes unnoticed, but at the same time not, is the absence of Lord Asriel’s perspective and any in depth details about his thoughts, actions or his plans. Though there is some coverage given by characters that have seen him, there is an intriguing void created by the nonappearance of Asriel, which only heightens the anticipation to his eventual introduction in the Amber Spyglass. The villain and Asriel’s adversary is Mrs Coulter, the relentless woman who is determined to stop Asriel and capture Lyra whatever the costs. Her involvement in the GOB experiments and her devious personality that was displayed in Northern Lights, combined with her unrelenting pursuit of Lyra and the alethiometer in the Subtle Knife, creates a villain that is hated and feared in equal measure. The presence and absence of a villain who is just in the background throughout the Sublte Knife makes for a tense and suspenseful novel as the reader knows her impending return can happen at any moment. Undoubtedly she will appear in the concluding book more as the end draws nearer and her opposition to Asriel, Lyra and Will will prove to be a stern test for them all, and I am certain her involvement will produce a thrilling climax to an already captivating series.

As mentioned earlier, Pullman creates supporting characters that exquisitely fit into the central narrative. Lee Scoresby encapsulates this idea, he appears in Northern Lights but I didn’t really feel attached to his character to the level I did in Subtle Knife. There is a much greater focus on his role in the events concerning all the worlds, and his loyalty to Lyra cements his place in the readers’ hearts as he is unquestionably a good man. His adventures bring in vital information about the Magesterium’s reaction to events at Bolvangar, the mystery surrounding Grumman/ John Parry as well as some of the answers concerning Asriel’s rebellion against The Authority.

Lyra, the headstrong, defiant and bratty girl that appeared in Northern Lights which would appeal to many young girl readers, enters the new worlds with the same ferocity and persistence in to figuring out the conundrum of Dust. However, she is quite unprepared for these new worlds where there aren’t any servants to cook meals for her, or to deal with the exponential increase in traffic or the perplexing nature of these other humans that don’t have dӕmons. She does though use her talent of reading the alethiometer, finding scholars and her personality to great effect as she follows the alethiometer’s instructions to help Will find his father. By following these instructions, the pair of them inadvertently get even further involved in the largely unknown prophecies surrounding Dust and the war Asriel is planning with The Authority. Pullman was intent on displaying similarities between Will and Iorek Byrnison, and Will began living up to the billing with his fight over the subtle knife with Emilio which was tiring, bloody and hard-fought.

Dark Materials is definitely becoming one of my favourite book series, and I will be reading and reviewing the concluding novel Amber Spyglass soon due to yet another Pullman cliffhanger that has whet my appetite to find out what happens next.

3 thoughts on “Subtle Knife Is A Cut Above The Rest”