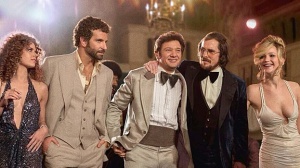 Irving (Bale), Sydney (Adams) and Richie (Cooper) are the definition of a dysfunctional team. After Irving and Sydney get caught doing some dodging dealing, they come together to even things up, and that is by trying to catch some important men who are also committing criminal activities. This dysfunctional team becomes even more when Rosalyn (Lawrence), Irving’s wife gets involved. The back talk and behaviour towards each other becomes more personal as they get deeper into the con that keeps dragging on until they are doing deals with Sheikhs, the Mafia and Congressman. There are tense moments, comedic ones too and not to mention the unpredictable.

The plethora of acting talent that is on show is very impressive. Each actor takes on a role completely different to anyone else in the film. We have; Christian Bale, who plays a complex, self-pitying and expert con artist. Amy Adams plays a sociopath and a serial liar while using her beauty as way to help with the cons she and Bale’s character carry out together. Bradley Cooper takes on the role as hyperactive and ambitious FBI agent Richie. Jennifer Lawrence is the highly strung wife of Bale who is devilishly troublesome to everyone concerned. Finally, Jeremy Renner completes this fine cast as he takes on the role as Mayor Polito of New Jersey, a man who hopes to revitalise the state through bringing back gambling to Atlantic City.

A hilarious running gag throughout the film which I want to bring to people’s attention, is when Richie’s boss Stoddard (Louis C.K.) tries to tell him a story of time he and his brother were on the ice in Canada during winter and his father comes out to them. But at various stages of the story Richie attempts to predict the moral of the story before he finishes, but he never successfully guesses. The hysterical rapport between Richie and Stoddard is encapsulated when Richie returns having caught a Mafia overlord’s lawyer of admitting criminal activities can be done with the money they bring to him. He returns to the jubilation of the entire office, this was just the beginning of the hilarity as he then impersonates Stoddard’s unimpressed reaction which received the largest laugh from the fellow FBI agents and also the watching audience.

Director, David O Russell takes us on a journey that leaves the audience disorientated. While still feeling the after effects of the brilliant fast comedic rapport of the characters, we feel mixed emotions at the film’s end as the characters have varying degrees of success and happiness that they gained from this elaborate plot. I fully recommend this film to any keen film lover, there’s a reason this film has been nominated for so much, it is up to you to find that out!

One thought on “American Hustle”